… is a nice little website application that I found, when trying to figure out how to isolate a single colour in a photo.

here is the result:

-some pomelo vendors on my street in Hanoi 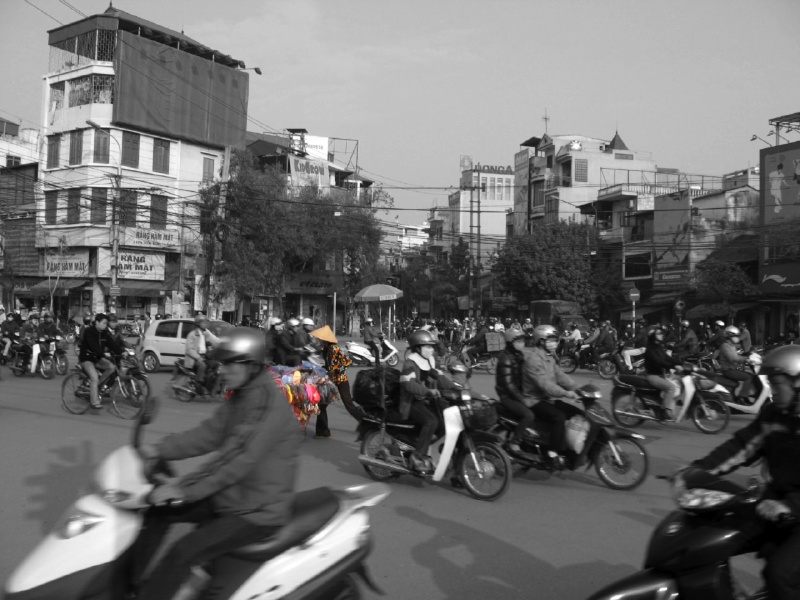 It’s pretty easy to use picnik, though it is a bit slow. Upload your photo (don’t even need to register) and it will take you to the ‘Edit’ tab. Switch to the ‘Create’ tab instead and select Effects. There is a basic effect called Black & White which lets you “paint” over the sections of the photo you want in black and white (or in colour). Good for people like me who don’t have software like photoshop to do it with (and who can’t figure out how to do it on graphic converter).

possibly my favourite park in hanoi, lenin statue park (not to be confused with the larger Lenin Park) is always filled with kids in the evenings: skateboarding/breakdancing hip-hop teenage kids, or–as shown here–young kids being driven around in remote-controlled cars rented by their parents.

all under Lenin’s proud gaze. 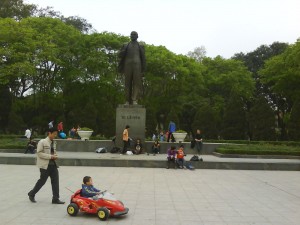 actually, this is me cycling on my way home from work. traffic is the number one thing travelers to Hanoi notice most, and it took me a month of cycling before I got the guts to go for the motorbike.

this is fairly light traffic, but gives you an idea… note the lack of traffic rules and the liberal use of the horn. my roommate makes the apt analogy with downhill skiing: just mind what’s in front of you, not what’s behind you (signaling is rare, and lots of people actually remove the rearview mirrors because they just take up space on the bike). heck, people don’t even follow traffic lights when there are any. and they don’t look down the road when shooting out of alleyways: a colleague claims this is a remnant from the French, who had some weird traffic law giving right-of-way to those coming out of side streets. some advice: don’t ask yourself questions like, “why is the car parked horizontally across the road,” or “isn’t this a one-way street?”–you’ll just confuse yourself endlessly. and never, ever get road rage. no one else cares.

spent a day with my roomie, Seth, wandering around town, shopping, eating at our fav veggie restaurant (Ha Thanh), and also… visiting the temple on kim ma street. 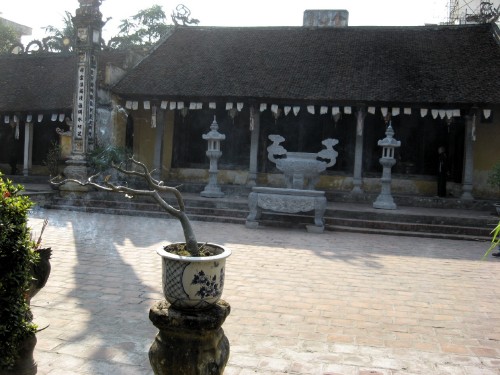 it was fairly quiet (well, compared to the chaos outside on the street), though there were a few people inside for the mid-month worship. like the other temples around town, this one had a chinese design (must be from the 1,000 years of rule and all). a lot of the time these temples also have really cheesy and ugly chinese sculptures… this one wasn’t too bad though, and even better: there was vietnamese AND chinese characters on the gate. cool! 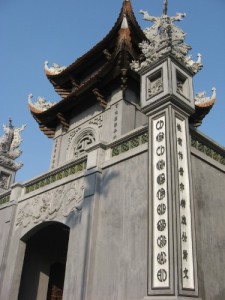 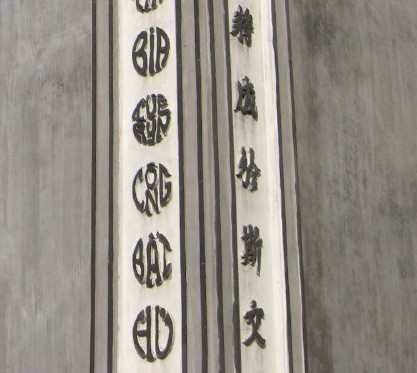 do you know what’s amazing about hanoi? no McDonald’s. no Starbucks. ok, granted there is KFC, but can you imagine such a glorious thing?

do you know what’s not amazing about hanoi? Lotteria. END_OF_DOCUMENT_TOKEN_TO_BE_REPLACED

the funnier sight may have been me trying to take a picture of this guy while cycling myself. 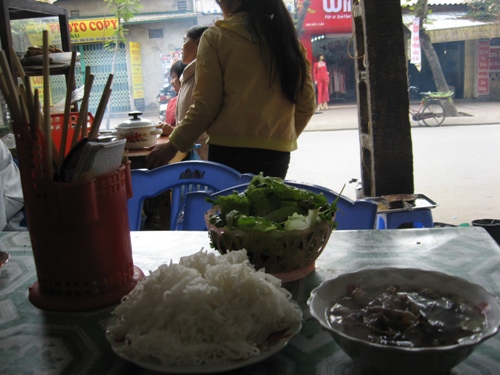 close-up on the meaty goodness: 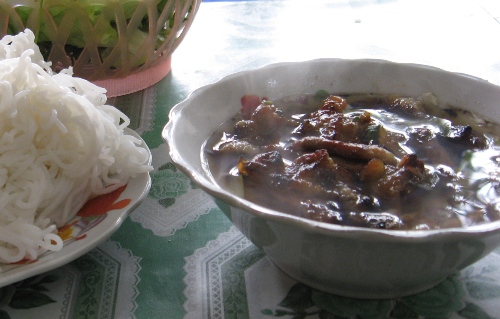 bun cha apparatus: bucket o’ coals, meat in a grill clamp, fan to keep the (amazing amount of) smoke out of your face and into the street (good advertising), little bia hoi stool to do it all from. 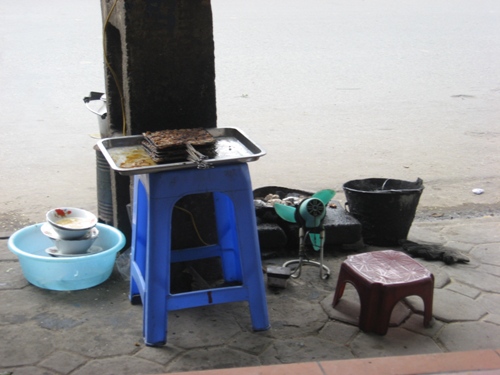 where sidewalks are apparently passing lanes. 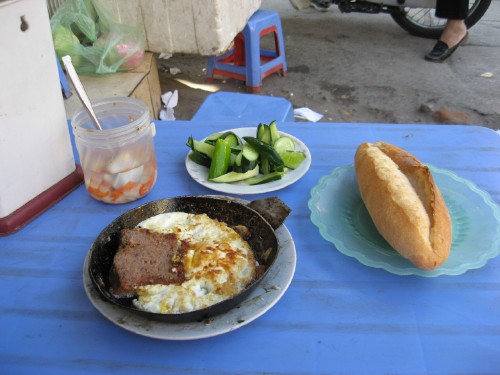 seems to be a cheaper version of banh my hue (don’t remember the price, but probably around 10,000 VND). yes, that is pate fried with an egg. you can’t imagine how delicious this is.

this was a super popular place on doi can, but as of yesterday has been replaced by a skater shop of all things. poo.