do you know what’s amazing about hanoi? no McDonald’s. no Starbucks. ok, granted there is KFC, but can you imagine such a glorious thing?

do you know what’s not amazing about hanoi? Lotteria. 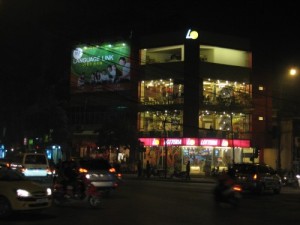 out of sheer curiosity (and a bit of boredom), I decided to try the lotteria a couple of blocks from my place. as opposed to most establishments here, it’s actually hard to miss, being 3 stories of modern looking fast-foodieness on a major street (good advertising for language link, too).

it sucks. 54,000 dong for orange flavoured water and a bulgogi burger (it tastes about as good as it looks–they even skimped on the sesame seeds atop the crappy bun). in addition to that, I had to wait forever to get the damn thing, though in typical vietnamese style there were about a gazillion workers to serve 3 people. what a let down.

it hurts to know I could have had 3 bowls of pho at that price.