Ok, so the statue is actually currently in Shanghai for the Expo, but I was curious what would be in its place. So after walking through a beautiful park (filled with runners and bikers, and on the map of Copenhagen it looks like a star!), I approached what appeared to be a billboard in the water: 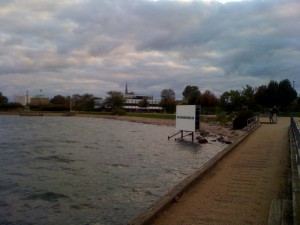 All it says there is www.mermaidexchange.com, but when I got to the other side… voilà! 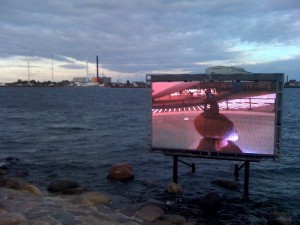 It’s the Little Mermaid in Shanghai via live internet feed! A placard nearby explains:

The Little Mermaid has gone to Shanghai

Until November, she will sit on her stone in the heart of the Danish pavilion at the world EXPO 2010.

Visitors to the pavilion will be able to experience everyday fairytales about the harbour bath, city bikes and other examples of how sustainability and quality of life go hand in hand.

While The Little Mermaid is in Shanghai, her usual location in Langeline, Denmark will be occupied by a contemporary Chinese artwork by Ai Weiwei.

The Little Mermaid has been lent out by the City of Copenhagen.

You can see the live feed yourself by going to the Mermaid Exchange website. Earlier this summer there was a long profile on Ai Weiwei by the New Yorker’s Evan Osnos, but since the full piece is not accessible without subscription, you’ll have to settle for a backgrounder on the artist (“one of China’s most prominent and provocative”) by the New York Times.

And so, according to the placard:

Ai Weiwei wants his work to create a connection between Denmark and China and at the same time reflect on the enormous difference in time, culture and political environment.