Oslo is known to be one of the most expensive cities in the world (but was recently surpassed by Copenhagen according to ECA International–a link that was sent to me by a friend in Geneva, btw). There are many reasons for this (which I still need to figure out), but for one thing the wages in Norway are much more equalized: the difference in salaries between the rich and poor is not so drastic as in, say, the United States. You can actually make a decent wage at a menial job here–but as a result, we pay more for services that would normally be cheap in other countries. For example, I paid 75 kroner (around $12) to copy my house key the other day. And haircuts here start at 500-600.

Which is a really roundabout way to say that I don’t often eat out (“You want me to pay *how* much for that?!”), and through a friend have discovered the different Asian grocery stores in the immigrant neighbourhood of Grønland. The shops I go to now are usually run by Vietnamese, but they sell products from a range of Asian and even African countries (I didn’t know they ate so much basmati rice!). Anyway, the main reason I go to these shops is because regular Norwegian supermarkets lack a lot of leafy greens and their fresh vegetables usually don’t look, well, fresh.

The Grønland stores are relatively small when compared to big Asian supermarkets in Canada, so it’s amazing how many different kinds of vegetables they manage to import. Yesterday I decided to try one I had completely no idea about: it’s called pak khom, and it is a leafy stem with beautiful purple centres, from Thailand.

After a bit of googling, I found out I could cook it like spinach. So I used our standby morning glory recipe: first stir-fry the stems, then the leaves, and then add a sauce made of chopped garlic, sliced thai chili, black bean sauce, soy sauce, oyster sauce, and sugar.

Turned out great, but the stems are rather chewy so will leave that out next time.

Finally, the last thing I ate yesterday was an apricot-kiwi crumble–I’m always amazed at what a brilliant way this is for getting rid of fruit (I always buy too much). Those are frozen blackberries, btw. 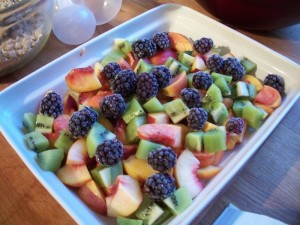