typical norwegian holidays involve going to a “hytte” (cabin) to get as far away from civilization as possible (unless you’re of retiree age, in which case your holidays consist of living in Spain for several months of the year). from what I’ve gathered, there are two types of hytte: (1) the mountain hytte, where you isolate yourself in the wilderness, with nothing to do but (ironically, cross-country) ski in the winter; (2) the sea hytte, where you isolate yourself in a fjord, going boating in the summer or pretending that you’ll actually go for a swim in the freezing water.

this summer we went to G’s parents’ newly renovated sea hytte at Finnøy, spending our time eating, doing yardwork, eating, feeding stray kittens, and eating. but one day we decided to take a drive to the neighbouring island of Talgje:
View larger map

our main purpose was to buy some plants at a nursery there, but then the nursery turned out to be a nearly empty greenhouse with only a few dozen potted flowers. and no one around but a sign with prices and a money jar.

so after buying a couple of pots, we continued down the road until we passed a tomato stand (this region being the source of most of Norway’s hothouse tomatoes). again, no one around but a price list and a money jar. oh, the trustfulness of Norwegians! 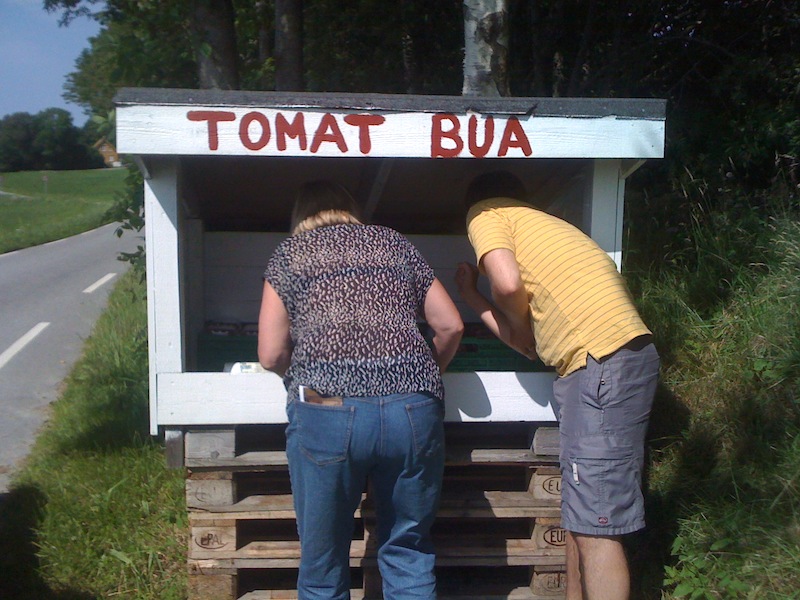 I thought these money jars were funny, but self-critical norwegians complain about their society being too trusting / naïve… (a debate which has resurfaced since the massacre, in relation to questions of security.) and yet the stranger question to me, while we drove around Talgje, was how a 10-square-kilometre island with fewer than 300 people managed to get the government to construct an underwater tunnel to the island?