An article on the impending gentrification of Coney Island just appeared in the Economist, and coincidentally a friend and I went to check it out a few days ago. 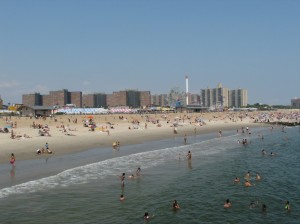 The first thing you notice is how huge the beach is. Being a Monday it wasn’t at peak crowd levels, but you can just imagine the capacity since garbage cans are well-placed on the boardwalk at about two-metre intervals. Since there isn’t much else around, the second thing you notice are the public housing towers that dominate the skyline. Though there is a famous (but sad) little amusement park and an aquarium, Coney Island gives the impression of a neighbourhood that has seen better days. Lots of buildings are shuttered up, and though there are beach crowds during the day, I don’t think I’d be too comfortable wandering around at night.

But there is of course the annual hot dog eating competition, which according to the countdown placed our visit just a couple of days before the Economist’s correspondent. 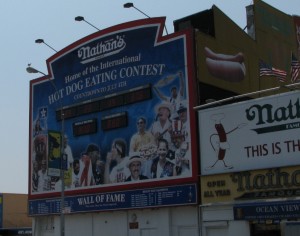