the dalai lama came to two churches in my neighbourhood this weekend! on saturday he appeared at riverside cathedral for an audience with the tibetan community, and on sunday it was with the general public (at least from what I could tell from the people waiting outside) at st. john the divine. it was the first time I had seen so many tibetans en masse and in their formal wear (looks like a chinese qipao, but with a long-sleeved shirt underneath and a colourful apron on top): 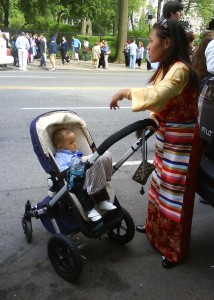 the curious and well-wishers outside of st. john the divine, as the dalai lama’s motorcade exits (G claims he got a wave from the dalai lama from the back of a black car): 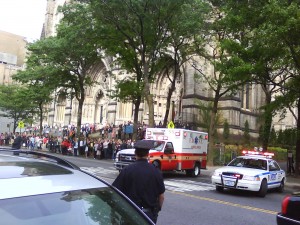