As New Yorkers voted for the richest man in the city for mayor, I spent the morning of November 3rd doing exit poll surveys for AALDEF. My shift started at 6 AM in District 20 of Flushing, Queens–which meant catching the subway at 4:30 from where I live. 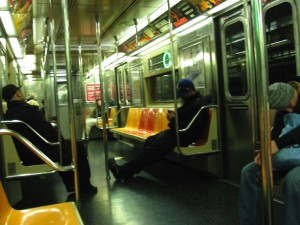 Flushing is one of the most diverse communities in New York, which is why I wanted to volunteer there (though I didn’t realize it would be at 6 in the morning). My shift started out with just me and a Korean guy doing exit surveys–and it was a good thing he was there, because at first there were far more Koreans than Chinese people coming out of the polls. In fact, whenever I would happen to approach a Korean (in either English or Mandarin, since I wasn’t sure of their ethnicity), they would just wave and walk by–stopping only once my partner ran after them, effusively cajoling them in Korean. With Chinese people it wasn’t so difficult, since many understood English and/or were very patient with my imperfect Chinese. Actually, since most voters in the morning were senior citizens, all were generally pleasant and patient.

There were some oddities at the poll though. There were the usual campaigners, who–though not allowed within 100 feet of the poll site–seemed to inch closer and closer as the day wore on (set back only temporarily when the police came by). There were also two poll workers who kept walking in and out of the building (and talking to campaigners) until my Korean partner went to complain to the site manager. One of them was a Chinese translator that was supposed to be there for voters who need assistance (as required by the Voting Rights Act)–in fact, a voter can ask for anyone to come with them into the booth to assist them in voting. A voter later complained to me that some poll workers inside were clearly advocating for certain candidates–which could easily go undetected by the Board of Elections personnel who did not understand Chinese.

Questions from the survey (also in Korean and Chinese):

The results of the election? Bloomberg will enter his third term in office (after conveniently passing legislation allowing him to do so), and Peter Koo (supported by Bloomberg) is voted to City Council. More interesting is that John Liu is the new Comptroller–and the first Asian-American to hold a city-wide office (he was also the first Asian-American voted to City Council in 2001). We’ll see in 2013 if he could be the next mayor…

For trends in Asian American voting from the 2008 presidential election, take a look at this report by AALDEF.