it may distress some of you to know that food isn’t good all the time in hanoi (and there are nasty rumours saying that all *good* vietnamese cuisine, and certainly what we know overseas, comes from the South)–however: there is not a single person who doesn’t love bún chả.

I admit I first heard of bun cha while bored on a plane, watching anthony bourdain arrogantly explore vietnam on his travel-slash-food show. I remember watching him at some hole-in-the-wall restaurant in hanoi, when the camera pans to the guy grilling meat on the street using a small wire contraption. I am transfixed. not only by his grilling, but also by his wild fanning of the unbelievably enormous billows of smoke rising from the tiny fire.

and that is how you know a bun cha place is nearby–if there seems to be more smoke in the air than usual (unfortunately sometimes hard to tell in hanoi).

here is a high-tech bun cha place that actually funnels the fumes into a hood (not very successfully, it seems). note the wire grills: 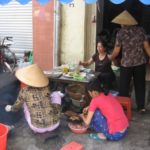 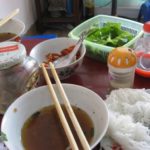 and I’m sorry, it seems I only have a post-consumption shot here. when having bun cha you’re given a bowl of grilled meat sitting in this sweet broth/sauce that I haven’t been able to figure out yet (the stuff you often get when ordering fresh spring rolls). you’re also given a plate of bun (rice vermicelli) and some leafy greens (incl. basil, etc.): basically dunk what you want into the broth and you’re good to go! condiments generally include pickled garlic and sliced chilis.

I’ll try hard to snap photos before eating next time.