The last of the men who threw paint at Mao’s portrait in tiananmen during the protests in 1989 was released from prison yesterday, now mentally ill from beatings and solitary confinement. He was originally imprisoned for sabotage, counter-revolutionary propaganda, and “very avant-garde views on art”.

Some friends and I went to tiananmen last June 4 to see if there would be any signs of protest at all. Of course everyone said there would be nothing except perhaps hiked-up security. Didn’t even notice that — the only excitement besides the long line-up (as usual) to see Mao’s embalmed body was some police searching one person’s bag.

And then they asked us to stop taking pictures. 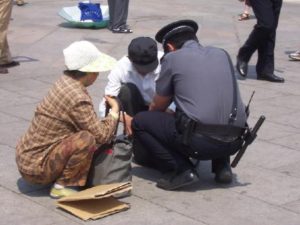