Not far from where I live is Aker Brygge, a fancy, ultra-touristy area by the harbour. It’s kinda lame. However, I noticed the other day that they have a parking lot for electric cars! 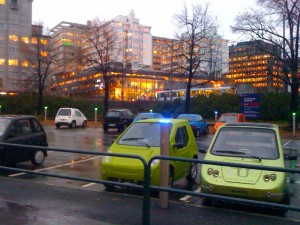 Most electric cars here are tiny and kinda flimsy-looking. But there is one that appears sturdy enough (akin to a smart car), made by the Norwegian company called Th!nk (possibly the black cars in the photo above). Norwegians have a love/hate relationship with Th!nk, since the company started way back in the 1990’s and still hasn’t made it big after nearly 20 years. (Ford bought the company in 1999 but then dropped them again in 2003, presumably because the electric car industry didn’t take off).

So with the technology available and our obsession with CO2 emissions, why didn’t the electric car industry take off?

Well, Th!nk is poised to take another shot at the US market. With a new (American) CEO, they are planning to sell their first cars in the US this December [CNN], with local production to begin in Indiana by the end of 2011 [CBS MoneyWatch].

And guess what, this spring there’s going to be a sequel to Who Killed called Revenge of the Electric Car:

“In 2006, as many as 5,000 modern electric cars were destroyed by the major car companies that built them.  Today, less than 5 years later, the electric car is back… with a vengeance.”