so I’m back from a weekend in new york, which was fun and mindboggling (for many reasons, best explained elsewhere). I hadn’t really been since I was little, when my grandparents used to have a store in chinatown. but we used to go lots so it was good that I could dispense with the über-touristy bits (er… and fao schwarz.)

what surprisingly sucked was the vast mediocrity of restos. so… perhaps west village isn’t the best place for food, but S and I passed at least 20 places before settling on (a franco-brazilian) one that we could agree *might* be alright. oh sure, there were plenty of places with patios, but looking at what people were eating–it just wasn’t that spectacular. And one can only deal so much with italian and french food.

[ okay okay we’re probably spoiled, but it seems like a travesty to leave montreal to eat french food. we also vetoed the chinese option because S was coming from toronto. and who goes to italian restaurants anyway. 😉 ]

but who needs to eat (did I just say that?!), what I did find amazing was the mesmerizing architecture all over the city: I could walk all day staring upwards at gargoyles, complicated eaves and art deco towers…

anyway, most of the weekend was spent with friends/classmates who are working at new york law firms for the summer (which I’ll write more about later) but the best touristy thing of note was the dada exhibit at the museum of modern art. absurdism seems to have a special place in my heart… and there were aspects of certain dadaist groups that I especially liked, like the wordplays with the French: 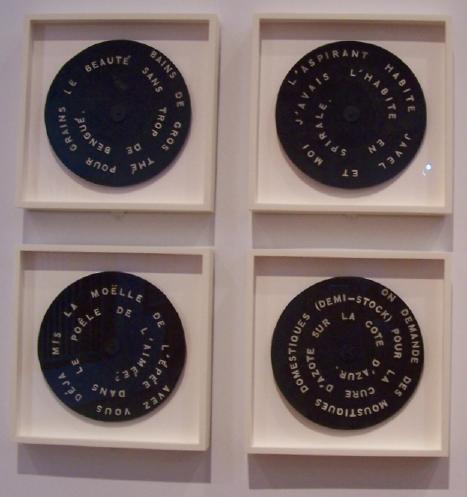 but but but! it was the german works that made it all worth it: the strong anti-opulent.ruling.class paintings by george grosz, otto dix, and max ernst (mainly caused by disillusionment after WWI) were fantastic and eerily way too appropriate for today’s political mood. very inspiring.