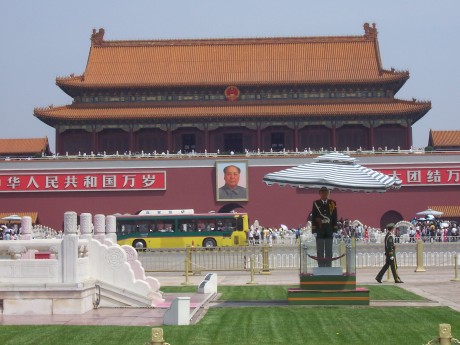 After living a few months in Beijing, my brain still cannot comprehend its terrifying immensity. This city is huge. 15 million people over 16,000 sq km, China’s heart keeps on growing, with now six ring roads radiating outwards from the city.

Living on Third Ring road, I knew I had to figure out the public transportation system to get around. The subway’s great, but its current span is only good for trekking around Second Ring and city centre. The cheapest way to get anywhere while at the same time immersing yourself with just about everyone is to take the public bus. But it’s kinda hectic. With 18,000 buses zigzagging over some 750 odd routes, even old Beijingers can’t keep up.

So first things first: I scope out the bus stops nearest my apartment. ‘Near’ apparently means that within a square kilometre all the stops have the same name: that of the neighbourhood, Huayuan Cun. Oh lucky me, at every stop several panels list the route of each bus that passes by.

Now if only I could understand them. 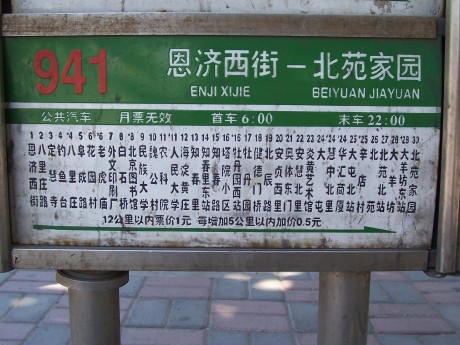 Even if I could read all the Chinese characters, the names of the stops are a combination of streets, landmarks, and random names originating from god-knows-when (which in China can be a pretty long time). Tiger Temple? Yellow Village? Oddly enough, you gotta know where you’re going when you get on the bus. No riding around aimlessly: since some fares vary by distance, you must tell the (screaming) bus operator your destination when you get on. An average bus costs 1 Yuan for the first 12 km, and an extra 5 Mao for every additional 5 km. Monthly passes exist but don’t cover all buses (you’ve got your electric trolleys, double-deckers, smaller air-conditioned buses…)

A typical bus is operated by a tag-team driver and ticket collector. The ticket person has the job of screaming the bus route out the window as the bus arrives at each stop, yelling at the driver when to shut the back door, and checking whether passengers have tickets or passes as they exit the vehicle. The driver tries (not always successfully) to not crash into other buses at each psychotic stop.

My commute spans only two stops, but brings me nearly two kilometres away. Riding in the morning rush hour has brought me ever closer to Beijingers – closer than I could have ever imagined. When a bus arrives bursting at the seams with people, you just take a deep breath and plunge in. I’ve learned so much about how to position myself efficiently in small spaces, how to get over my politesse of not shoving, and how not to accidentally have sex with my bus comrades.

One of those daily mundane Beijing episodes that I find incredibly amazing. I’m fascinated by how strangers on the bus interact: millions of people are just used to living closely with millions of others. A certain comfort with humanity that just doesn’t happen in Canada.

A woman is sitting next to me staring at a piece of paper with numbers on it. She tries entering it on the computer and it doesn’t work — so I turn the power on for her.

(Yes, that kind of person.)

Anyway, her machine is on the end of the row, so through lack of alternatives she keeps asking me to help her out. I can only guess the numbers given to her were for QQ, which is the chat program that a lot of Chinese use.

So it gets to the point of course, where QQ is good and running, and since I’ve never used it before… I show her how to access the menu then tell her she has to read the items herself since I cannot read 汉字.

And this has happened before, but never after such a length of time. “What? How can you be han, and not read 汉字”

I’m not sure whether to be flattered or not.

“Why is your hanyu so bad? Where are you from?”

“Just take me to huayuan cun.”

I had to direct another cabbie today to where I wanted to go. 五道口 is a pretty major area (and any subway stop should be for chrissakes — the same thing happened to me with ÂÆâÂÆöÈó®). The korean Lion King karaoke place is down the street, and the bar Propaganda is next door. But today I’m writing my Chinese homework in CAVA CAFE, with its southwestern US cactus feel and thai fusion food. Some white dude is eating his salad with his hands, wearing plastic gloves, and Leonard Cohen plays on…

My quest for engrish shirts continues:

We Feel A GLITTER SPIGA