Trains are a great way to travel within China. There are several different categories of train, as identified through the route number. Routes consisting only of digits (no letters) are the regular, cheapest (and slowest) trains. Train numbers starting with ‘K’ are fast trains (kuai literally means fast), T trains are te-kuai (especially fast), and Z trains are zui kuai (“fastest”). Except nowadays there are even faster, more modern trains in the C & D category (no idea what these stand for), available on popular routes such as Beijing-Shanghai.

Seats fill up fast though, so unless you got your tickets early you may not have a choice of train. Train tickets are sold only 11 days in advance, and only from the city of departure: you cannot buy a ticket in Beijing for a train departing from Xian, for example. (Well, you can pay a travel agency to do this for you for a fee, but they are still limited by the 11-day selling period.) Since I rarely travel on a fixed itinerary, I typically buy tickets the old-fashioned way: jostling with everyone else at the train station.

As time-consuming and painful as it seems, I actually like going to the train station to buy tickets. Before you even get in line, there is typically a board showing ticket availability for the next 11 days–though it takes forever to flip through when at a major hub like Beijing. In addition to the different train routes, there are 4 classes of tickets: hard seat, soft seat, hard sleeper & soft sleeper. Hardness/softness isn’t literal (except possibly in the case of hard seats), but they do indicate the level of comfort you will be traveling in. Hard sleepers mean sharing a train compartment of 6 bunk beds, while soft sleepers have only 4 (along with a door that closes, if I remember correctly). And for some reason, the higher up your bed is, the cheaper the ticket–for reasons I haven’t figured out yet.

Actually, there is a fifth category: “no seat,” which I suppose is cheapest of all, but would only do if the distance were short (or your desperation great).

This summer I visited a few different train stations and couldn’t help but notice a general change in people’s behaviour. On my first trip to China five years ago, I remember being appalled and intimidated by people pushing and butting in front and crowding the ticket window–all this despite the metal guardrails put in place to enforce a line. But now in 2010, it was quite orderly: though you still feel rushed by the sheer number of people behind you, no one is shoving you and you get your turn at the window like everyone else.

I have no idea what you’d do if you didn’t speak Chinese though.

When we were in Xian, it was impossible to get sleeper tickets to Beijing, so we opted for soft seats on the overnight Z train: 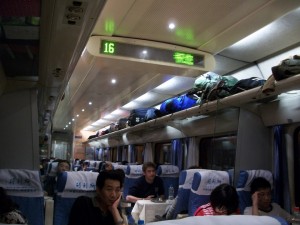 And because of ticket availability, our plan to go from Beijing to Ha’erbin was replaced as we got hard sleeper tickets on a regular train to Dandong:

This 20-hour trip was uneventful except for the police boarding the train at one point and checking everyone’s ID card (not sure what that was about). Our car was also quite peaceful compared to other overnight trains I’ve taken before: no raucous drunken card playing in the middle of the night, but rather families playing with their young kids or napping away the time.

Then there was the couple on the bottom bunks, who for the 20-hour duration would magically bring out from the recesses of their luggage more and more bags of food (instant noodles, crackers, cucumbers, peaches, you name it)–which put our meager snack bag to shame (at that point of the trip we didn’t even have a tea canister! unthinkable in China…). A sample of our booty: “bimbo” bread (mediocre white bun with red bean), sunflower seeds, dried kiwi and dried tofu snacks. 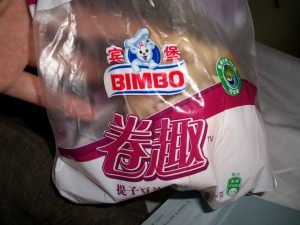 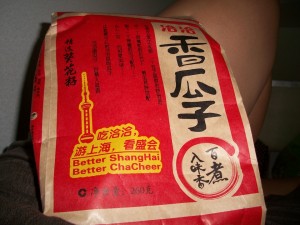