Liang pi literally means ‘cold skin’ in Chinese, and is a lovely cold snack served in the summer. This dish comes originally from Shaanxi province but you can pretty much find it everywhere in northern China, and in Beijing it is common to find liang pi stands on the street, like so:

It’s basically a cold noodle dish, but the noodles are cut from a large sheet or ‘skin’ (hence the name). According to Cultural China’s website:

First, wheat or rice flour is turned into a soft dough by adding water and a little bit of salt. Then, the dough is put in a bowl, water is added and the dough has to be ‘rinsed’ until the water is saturated with starch from the dough, turning into a muddy white color. The remainder of the dough is now removed and the bowl is left to rest overnight at a cool place to allow the dissolved starch to precipitate. The following day, there will be a kind of starch-paste on the bottom of the bowl with a more or less clear liquid on top which has to be discarded. Once the liquid has been removed, a small amount the paste can then be poured into a flat plate or tray, and spread evenly in a thin layer. The whole plate is placed into a large pot full of boiling water, where it is steamed for a couple of minutes and the resulting ‘pancake’ cut into long pieces vaguely resembling noodles.

Ok, starch paste doesn’t sound so appetizing, but it’s the sauce that makes this dish! Variations abound, but the main ingredients include garlic, vinegar, chili oil and sesame sauce. As Julia Moskin of the nytimes describes it, the sauce “hits every possible flavor category (sweet, tangy, savory, herbal, nutty and dozens of others).” (Coincidentally, she is describing my fav place to eat in NY, Xi’an Famous Foods–whose version of liang pi actually inspired us to go to Xian this summer! Yes, it’s that good.)

Finally, the noodles and sauce are tossed together with chunks of wheat gluten, cucumber slivers, sometimes beansprouts… a savoury yet refreshing dish when you’re sweltering from the summer heat. Prices range from 3-10 yuan in Beijing, with the more expensive ones coming from fancy shopping mall food courts (gotta pay for the aircon, I suppose). 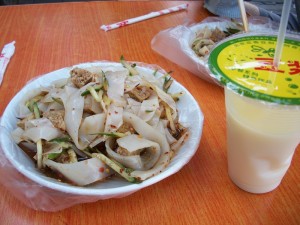