Not sure why and when people use simplified characters in Taiwan. If it were simply a matter of ease in writing, it would be more prevalent. Here it says 周年庆 instead of 週年慶. 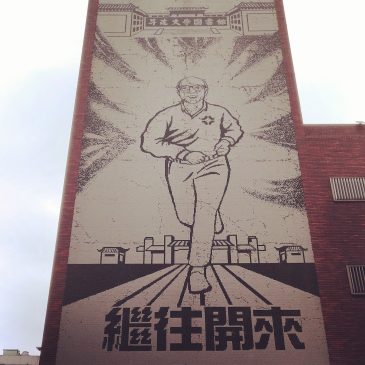 Follow the past and herald the future 繼往開來 #idioms #retro #streetart

look me, Look Me, LOOK ME, LOOK MEEEE mummy! I still have to remind attention-seeking S that it’s “Look at me” and not “Look me.” I believe this grammatical mistake stems from him being more used to saying 你看我！ in Chinese, where of course prepositions do not exist.

James Wood, from the New Yorker: I have a friend, a writer, who became so obsessed by the Norwegian novelist Per Petterson’s “I Curse the River of Time” that he copied it out, word for word—perhaps hoping that his pure replica might unlock the secrets of that mysterious book, with its curling form and drifting sentences. When he told me … Read More

…words I wouldn’t have known without having an Australian officemate.

A common difficulty for Norwegian learners is to distinguish between the different “thinking” words. Using the right word for the right context is not always easy–at least if you’re worried about offending people. jeg tror = I think, but only in circumstances for which you are uncertain about something. for example, “I think he is 32 years old”–implying that you … Read More

well, this is according to Wikipedia, but it’s cool if true: Ai Weiwei’s father was a famous Chinese poet called Aì Qīng (艾青). But that wasn’t his real name; his original name was Jiang Zhenghan (蒋正涵), styled Jiang Haicheng (蒋海澄)–in addition to his numerous pen names. Anyway, this poet was tortured and imprisoned in 1932 for opposing the Kuomintang (KMT) party. While … Read More

I learned from my first Norwegian teacher that the English and Norwegian languages used to be very much the same, but then went divergent ways over the centuries. Today I found on my bookshelf (it must be G’s) a book called The Mother Tongue: English & How It Got That Way by Bill Bryson–and while skimming through it I found … Read More