It doesn’t happen all the time, but as a foreigner you can expect to be approached for money when out on the street. For me it’s usually the same three kids living somewhere near my street–and my preferred response is to give them some bananas or other food, if I’ve just come from the store. Once, a man asked that I buy him a bag of maize meal (which costs 100 shillings) so he could feed his family; another time, an old man asked for 200 shillings to complete the “bus fare” to his village.

Now for the first time it’s someone I know that needs help: the caretaker for our apartment building is raising money for his wife’s surgery through these business cards: 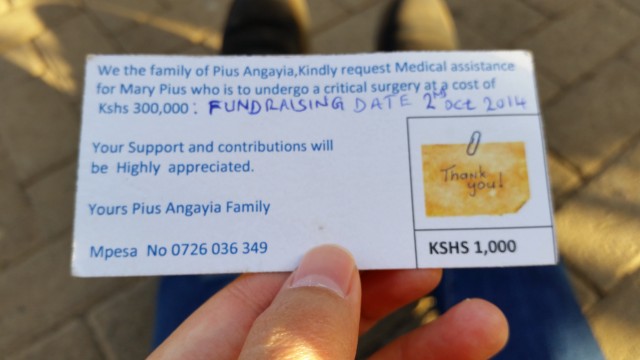 Quite effective! At least instead of simply asking verbally. (For some reason seeing it in print makes it more credible…?)